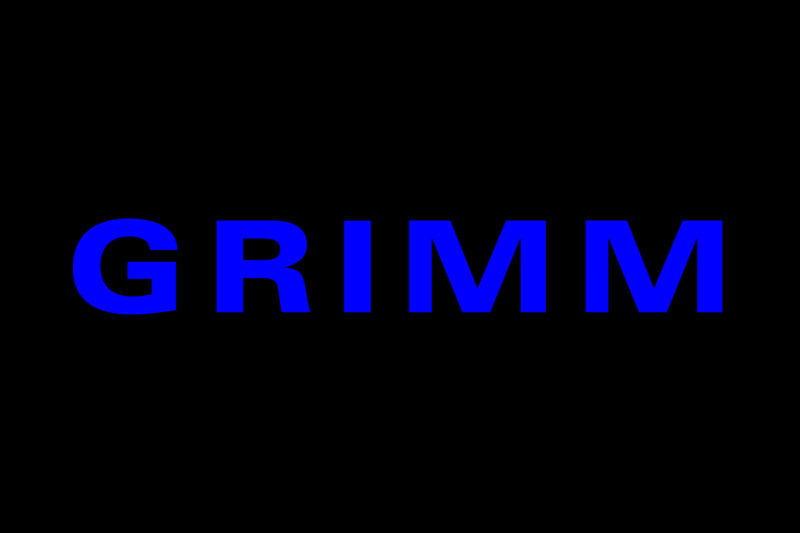 As dusk falls, wondrous sequences of words will shine in deep blue on the façade of the Brüder Grimm Haus at Turmstraße 75 from 10 December 2020: AUS – MAUS – MUS – RAUS – RAU – REH – RUM.

“15 Letters – 101 Words” is an artistic intervention by Penelope Wehrli over the lettering on the Brüder Grimm Haus building, which begins this evening as a year-long word-light play as part of the DraußenStadt initiative. The name BRÜDER-GRIMM-HAUS identifies – usually little noticed by passers-by – the historic house in Turmstraße, which with all its institutions has been dedicated to art, culture and further education for decades.

Penelope Wehrli places the name above the window front of the Galerie Nord | Kunstverein Tiergarten at the centre of her installation. The individual letters of the three words form the material for her artistic work and the puns she has composed, some unusual, some absurd, shine in the most varied combinations, speeds and rhythms. They make references to the German dictionary of the Brothers Grimm and give rise to images of their collection of fairy tales. The overriding of syntactical references and the use of tonal sound sequences evoke associations with comics, trash art and Dada.

Our language is a living organism and is in a state of permanent change. Letters and sounds become words, they are shaped, written and spoken. They denote and generate consciousness and meaning. They play with meaning, are the medium of our culture and create a sense of belonging. Again and again, new words and terms are created – or disappear from our vocabulary, for fashionable or socio-political reasons, sometimes rightly, sometimes wrongly, accompanied by a feeling of relief or regret.

Language crashes, cuts, sings. Be it crude, precise or poetic: it opens up spaces for imagination, sound and feeling. With her intervention, Penelope Wehrli not only raises awareness of the name of the house, but above all of the vitality of culture and language.

With the kind support of the Office for Further Education and Culture and DraußenStadt of the Senate Department for Culture and Europe. 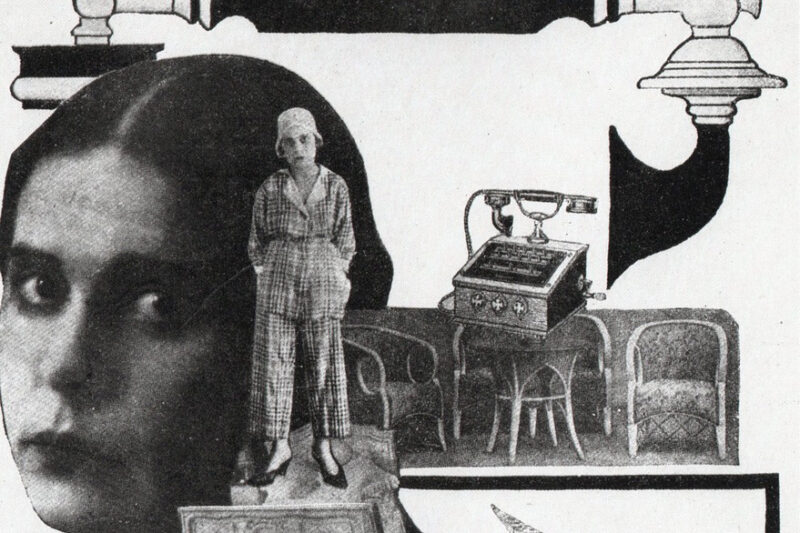 La Voix humaine is a mono-opera by the French composer Francis Poulenc, composed after a play by Jean Cocteau published in 1930. For the first time in opera literature, it deals with the decoupling of the human voice from the spatial reference system of those singing and those listening.

Allô, tu es là? Hello, are you there? … a female voice asks and begins a mono-dialogue with an invisible person who never appears: her former lover. She talks to him on the phone – for us the most normal thing in the world – almost everywhere.

Let’s go back to Paris in the 1920s/1930s: a vibrant metropolis between two world wars in which, alongside Dada, surrealism and psychoanalysis, a new technical device makes its way into the everyday culture of communication: the telephone. At a time when people were still used to face-to-face communication, people began to speak alone into a metal funnel. Actually, at that time, a person who spoke loudly and alone to himself was a person out of his senses, crazy or at least suspect.

In this era of massive technologisation, accompanied by radical political, social and artistic upheavals, Jean Cocteau wrote the solo theatre piece La Voix humaine, which was adapted as a mono-opera by Francis Poulenc in 1958.

A technical device, the telephone, became a co-player, the second actor in the play. What do we hear? The reality of voices, the resonance of words, the meaning of what is said, what we want to hear, the unsaid?#

Musical pauses, as a reference to possible technical malfunctions or interpersonal silence, interrogate the presence or absence of the other in the distance at the other end of the line. Cocteau plays literarily with the real, technical or mental presence and absence, and Poulenc also brings the ambivalence of human communication into focus musically with this work. Moreover, this opera is the first to address the decoupling of the human voice from the body and the direct spatial reference system in opera literature.

In the course of the monologue, the woman begins to regard the telephone as a “terrible weapon,” at the same time pleading with the object and blaming it for the futility of her efforts. A telephone is subjectivised and an echoless voice despairs of absence, for the other side is silent, the apparatus remains mute. Hello, are you there? The answer remains absent.

At the opera happening in the Galerie Nord | Kunstverein Tiergarten, a team of international artists from the fields of opera, art and music take up Cocteau’s and Poulenc’s themes, which revolve around the uncertainty of communication between reality, truth, fiction and fantasy. In a purely analogue performance, they celebrate the ambivalences and absurdities of communication between voice, body, movement, and an installation of abandoned objects. A singer, a pianist, a performer, a visual artist and visitors are gathered in a room and move freely, there is no dominant perspective. Depending on where and when they do something, what they see and hear, they become transmitters and receivers in the interplay of sound, movement, language and space.

The production takes up strategies of Dada and Surrealism, couples seemingly contradictory emotions, memories, fantasies; plays with the combination of fixed musical structure and the unpredictability of performative action between actors and visitors. The ambivalence of communicating, of understanding and being misunderstood as well as the loneliness of the echoless voice are central themes of the happening.

Supported by the federal programme “Neustart Kultur” of Stiftung Kunstfonds and by the multi-sector funding as well as the district funding of the Senate Department for Culture and Europe, the Klaviersalon Berlin and Musikschule Fanny Hensel. 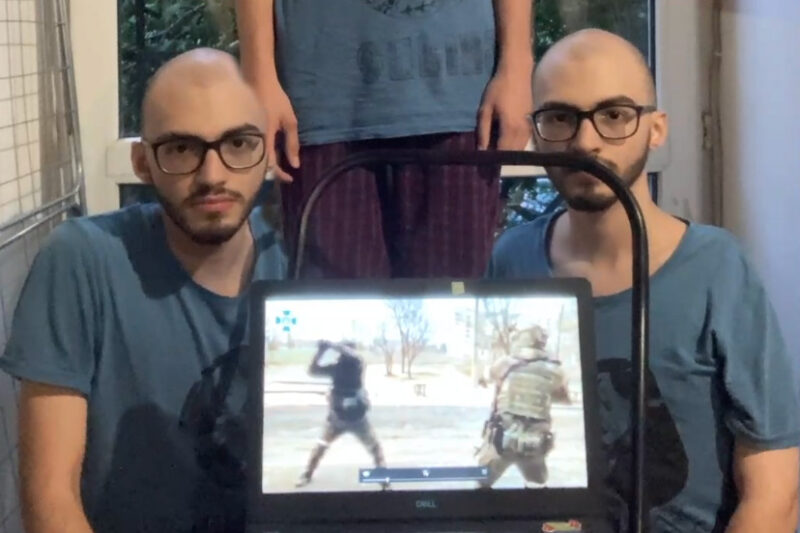 with Maksym Khodak and Valeria Schiller (in English) 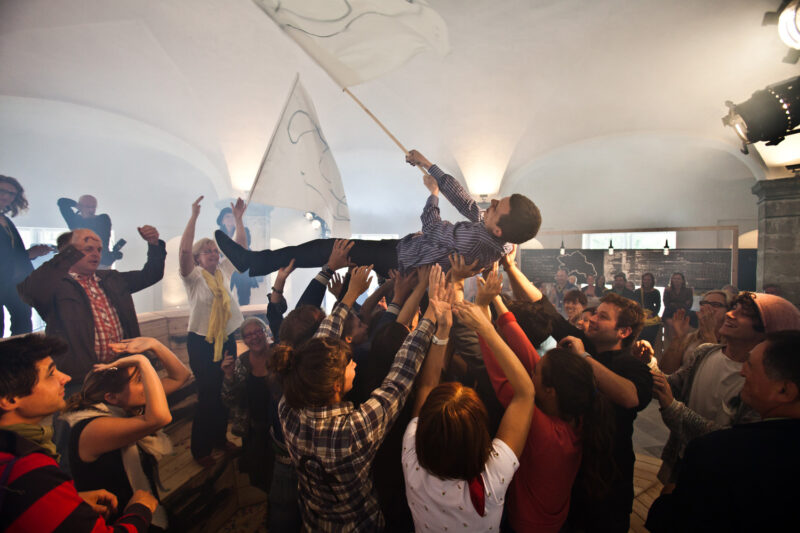 with Christian Falsnæs (in English) 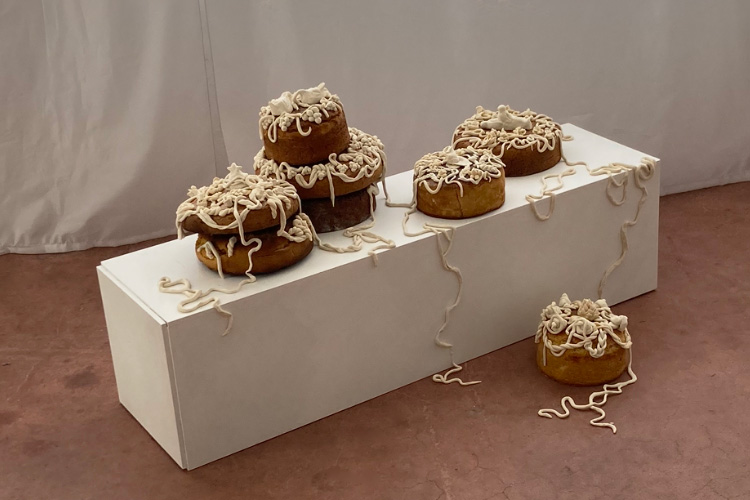 with Zhenia Stepanenko (in English) 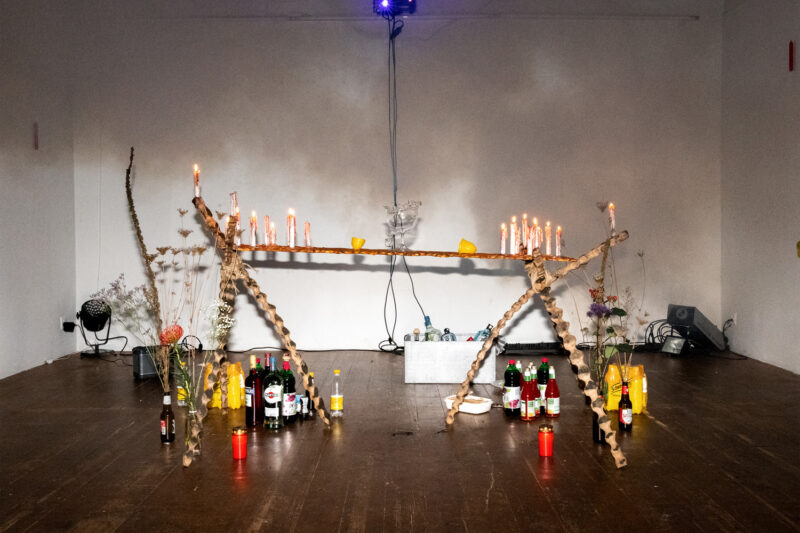 with tanatos bar (in English)