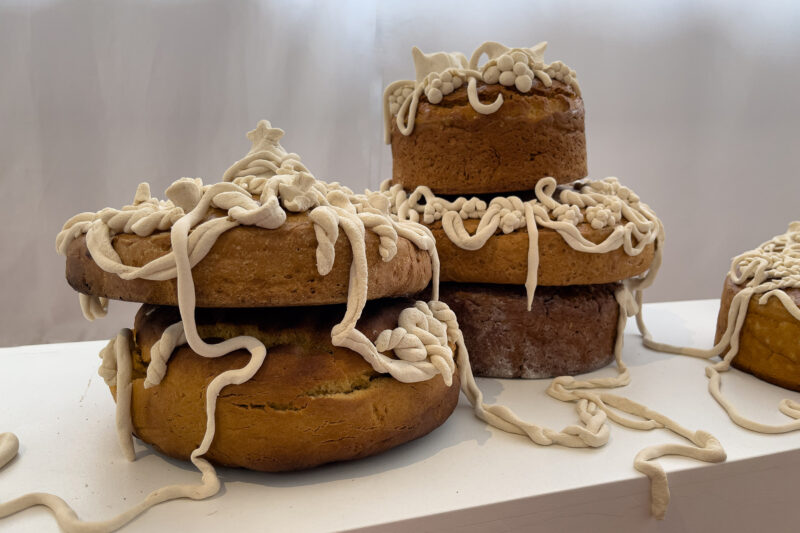 Humans are social and political beings and their voices are essential as the physical site of the social realm (Dieter Mersch) The voice is never just a tool of articulation, but is always linked to action. It becomes political in institutionalised practices like the right to vote, voting and the counting of votes. People gain a sense of reality and the opportunity to appear through being allowed to speak with their own voice and being heard. According to Hannah Arendt (in The Human Condition), to appear, being ‘seen and being heard by others derive their significance from the fact that everybody sees and hears from a different position.’

The curator of MITbeSTIMMEn and the participating artists have a transcultural background and move in the interstices of the glocal that arise between different places, states and cultures. In their artistic approaches, they explore the ambiguity and prerequisites of having a say and being heard from the perspective of migrants and nomads.

The exhibition MITbeSTIMMEn shows conflicting relationships between the voice as a bodily phenomenon and the voice as a political and social form of expression. Who is allowed and able to have a say? Whose voice counts and is heard? Using a variety of media from photography to video and sculpture to embroidery, the artists play with political narratives, aesthetic regimes and the language of propaganda. The works presented refer to the present as well as to history. They illustrate the potential of co-determination as well as concepts of selfhood and being a subject in the community.

Note: The German title „Mitbestimmen“ means: having a say/a voice in something, participation in something

Over the next two years, the Galerie Nord | Kunstverein Tiergarten’s VOICE:over programme series will delve into various phenomena related to the voice. With cross-disciplinary exhibition projects, performances and a multifaceted outreach programme, VOICE:over explores the changes in meaning and significance of physical and social forms of the voice – from screams to speech and song to artificial intelligences’ posthuman imitation of the human voice.

Supported by the federal programme “Neustart Kultur” of Stiftung Kunstfonds and by the multi-sector funding as well as the district funding of the Senate Department for Culture and Europe.